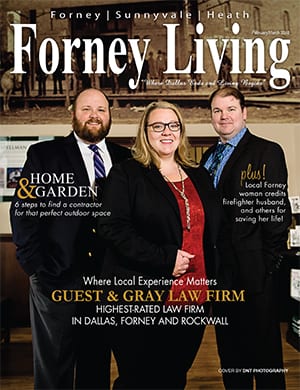 While Guest and Gray offers Forney and Rockwall residents the full scope of legal services they’d find at a big downtown law firm, what sets them apart is their emphasis on customer service. “From day one, our focus has been on the client experience,” says founding partner Robert Guest.  “It’s never enough to just do great legal work.  That’s only the first step. We want to make sure our clients understand the legal process. What are they going through?  What can we do to make it easier?”

It’s a philosophy that he and Scott Gray—the other founding partner and one of the Grays in Guest and Gray—share.  “We both have business backgrounds and look at a law practice the same way—it should be customer driven,” says Scott Gray.  For Scott, whose father is also an attorney, a legal career was in the blood.  “There’s nothing else I considered doing,” he says.  After working at the Grayson County D.A.’s office, he came home to Forney and opened an office with his dad.

Seven years ago, Guest—a criminal lawyer with a solo practice—had primarily quit taking civil cases and was sending them to Gray. Gray, conversely, was concentrating on civil cases and sending all his criminal work to Guest, so the two decided to merge their practices.  With the goal of creating a local, large, full-service law firm, the two opened Guest and Gray in Forney in May of 2011, offering representation in all areas of the law, including criminal, family law, estate planning, personal injury, and business law.  Tracy Gray, Scott’s wife, also joined the firm as a partner and manages the firm’s family law practice. Today, the firm employs nine lawyers, and opened a second location in Rockwall in 2013.

When the City of Mesquite tried to push through hundreds of forced annexations of unincorporated parts of Kaufman and Dallas counties before a new state law took effect that would ban them from annexing the property without the owners’ consent, Guest and Gray Law Firm was there fighting alongside the residents.

“It was personal.  This was our community,  our  neighbors,”  says  Guest  and  Gray partner Tracy Gray.  All three partners grew up in the area.  After attending a Town Hall Meeting hosted by Kaufman County State House Representative Lance Gooden, Tracy Gray agreed to take on the citizens’ case  pro bono.  “I was there to answer questions, but I looked out at all of those people who were scared—people who had land that had been passed down for generations, families who were following their dreams and working the land and so close to getting an agricultural exemption but about to lose it all—and it was heartbreaking.  It felt wrong,” says Gray. “So I said, ‘We’ll try.  We’ll fight.’”

Thanks to her diligence, tenacity, and astuteness, Gray researched and found a loophole that resulted in the issuance of a temporary restraining order that  blocked Mesquite’s ability to grab the land before the law took effect. The City of Mesquite had violated the rules of the Texas Open Meeting Act by not giving the required notice of meetings regarding the proposed annexation, and Gray and the citizens soon had the support of  the Texas attorney general. Ultimately, the case settled and the choice to be

independent or incorporated remains in the landowners’ hands.

“It’s not every day that you take on a case and know you made a difference,” says Tracy Gray about winning the case against the odds (residents in other Texas counties weren’t as lucky). In addition to feeling good about the outcome, she also enjoyed working on the case.  “I like the more complex cases,” Gray says.

Gray hopes to bring that ability to work through complex matters, along with her experience, to the court.  Gray is running for judge of the Kaufman County Court at Law as a Republican candidate.  Having previously worked as a prosecutor in the court that she’s running for, Tracy Gray understands the court and how it should be run. With five years of experience as a prosecutor with the DA’s office in Kaufman and seven years in private practice, Tracy has extensive experience in criminal, family, and juvenile law—all the areas that the County Court at Law handles. “My goal is to use the experience that I have and run an efficient court,” she says. As the chief family lawyer at the biggest law firm in Kaufman County and mom to twin four-year-old girls, Tracy knows all about efficiency.  She also believes judges should follow the law as written, not legislate from the bench.

Meanwhile, Tracy has become something of a local celebrity thanks to the win over the City of Mesquite. “She’s our office celebrity,” jokes Guest, who adds that her big win underscores the benefit of a large local firm like Guest and Gray.  “If it’s complicated, we can do it.”