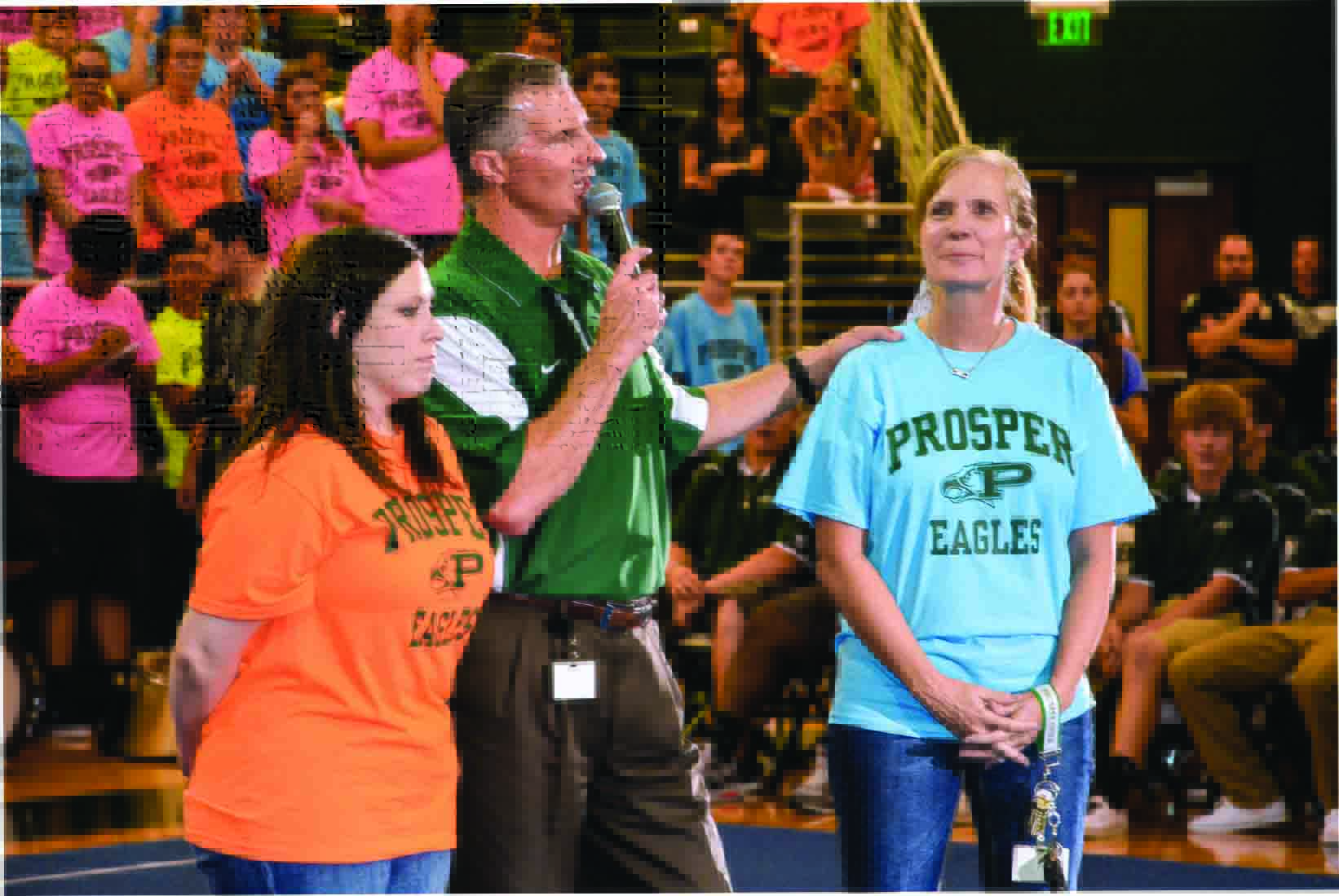 The crowd roars, chanting, more loudly each time, “We are Prosper! We are Prosper!” With wild cheering and yelling, they finish, “Believe in the hype!”

Leading it all, jumping up and down on the arena floor with a wide grin, is Prosper High School Principal Greg Wright. Under his leadership for the past two years, school spirit has grown; the culture of school pride, commitment to excellence, and teamwork has exploded; and moments like these have created memories that students will never forget.

“Do your best!” is the motto he lives by every day. “I challenge the freshman,” says Wright, “this is the only high school career that you are ever going to get, so make the best of it!”

From a young age, Wright knew he would be an educator. He grew up under the inspiration of his father, who progressed from teacher and coach, to Wright’s own high school principal, to assistant superintendent, then finally to superintendent of schools, where he ended his 46-year educational career.

“If I could accomplish only 50% of what he did in his lifetime in education,” Wright says of his father, “I’d have a pretty good career!”

Wright himself was a high school principal for five years in his home town of Tyler, then spent eight years as superintendent in Hallsville before returning to Tyler as a principal. He had intended on staying there until retirement, but then had an opportunity in Prosper.

“When I got a phone call to apply for this job,” says Wright, “I didn’t even know where Prosper was.” But as he researched the area, he learned of the district’s “students first” motto and its commitment to excellence. Both were so closely aligned with his own educational philosophies that he was immediately interested.

“I can truly say that these two years in Prosper—at this high school campus and in this school system—have been my happiest time ever,” Wright says. “Ilove this place! This is where I will retire—right  here.  I don’t  want  to  go anywhere else!”

Wright loves being a high school principal. His commitment to excellence drives his desire to build upon previous experiences and to create new memories. He is in education to make a difference in the lives of kids, as evidenced by the many photos lining his office bulletin board, serving as daily reminders.

“I want to touch lives, shape lives, and make a difference in lives,” says Wright.

“I want to be a part of their daily operation at school,” he continues. “That’s the fun part of my job—being able to see kids every day. That’s why you see me emcee pep rallies and be very actively involved in all of the activities here—I want to be in the middle of it!”