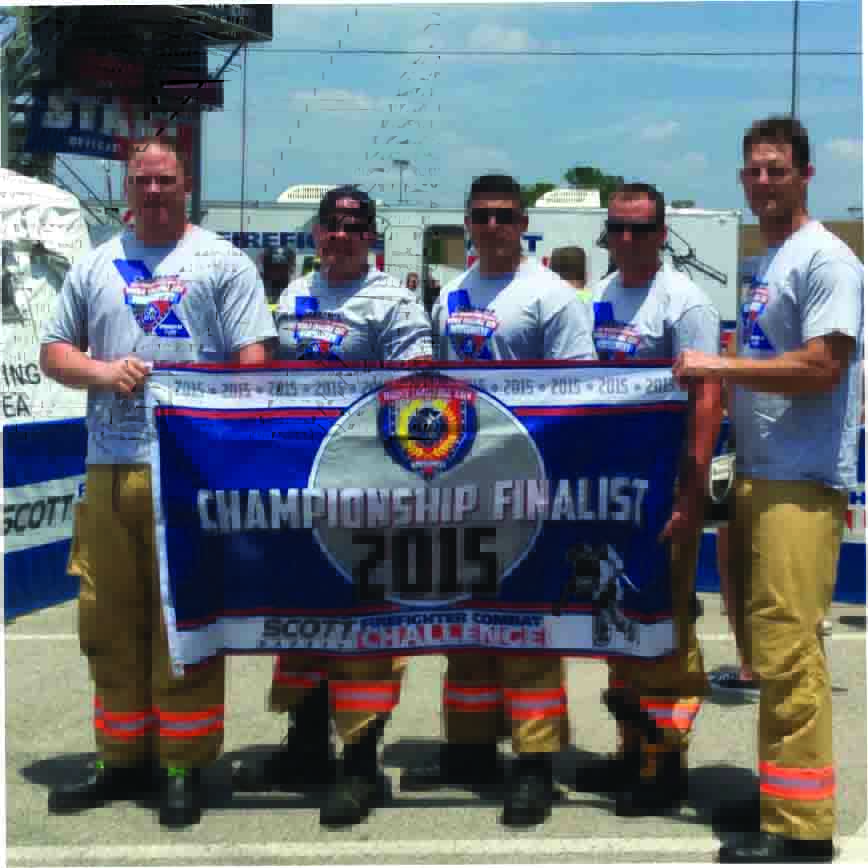 06 Oct The Mighty Firefighters of Forney BY WENDI CARTWRIGHT

This challenge is not for the weak of body or faint of heart. It’s said to be the “Toughest Two Minutes in Sports.” Attracting hundreds of the most physically fit firemen around the world, competing in timed obstacle courses while in full bunker gear and breathing apparatus, competitors race head-to-head as they simulate the physical demands of real-life firefighting. A series of five tasks, including climbing a five-story tower, hoisting, chopping, dragging hoses and rescuing a life-sized 175-lb. “victim,” are timed as they race against themselves, their opponent and the clock.

The Forney Combat team will represent the city well when they compete in the World Finals. In addition to qualifying as a team, team captain Russell Bannister set a new personal record in the individual category. His time, 1:38, placed him seventh overall out of 56 and qualified him for the individual competition in the October event.

Involved in organized sports all of his life, Bannister attributes his involvement in the Combat Challenge to his desire of wanting to stay in great physical condition for his job. Being in the best shape possible helps keep him safe, as well as being able to keep others safe. The comradery with other firefighters, now friends, across the world, motivates him to stay fit.

“The unique brotherhood bond that’s shared with others is unlike anything else I’ve experienced in sports. Yes, you’re competing with each other, but you also are pushing and encouraging each other to be better,” Bannister said.

As the city and residents of Forney help celebrate the achievements and dedication of its firefighters, another celebration is in order too. In August, the City of Forney celebrated the official groundbreaking of Forney Fire Station No. 2. Forney Fire Chief Rick Townsend explained. “If our weather holds and I think it will, we have a build out time of approximately nine months from the time they started. So hopefully we will have this station up and running sometime next summer. That’s our plan.”

Chief Townsend continued, “What I envision for this station, when it gets built, is that it’s going to be not only a base station for our first responders to be housed in and to respond from to our northern end of the city and community, but it will also be close to our neighbors and other county towns.”

Because of the increase in Forney’s population, the current fire station is simply not large enough to handle the demands of the growing city. The new, state-of-the-art building will be approximately 11,500-square feet, featuring a training facility, as well as large bays to house trucks and other equipment.

The citizens of Forney are in good hands. Strong and fit firefighters stand at the ready for any need that may arise, and in just a few months, the firefighters will have at their disposal a new fire station that is built to enhance the manner in which they do their jobs.

Next time you see a firefighter, offer a heartfelt “thank you” for their dedication in keeping all of us safe.