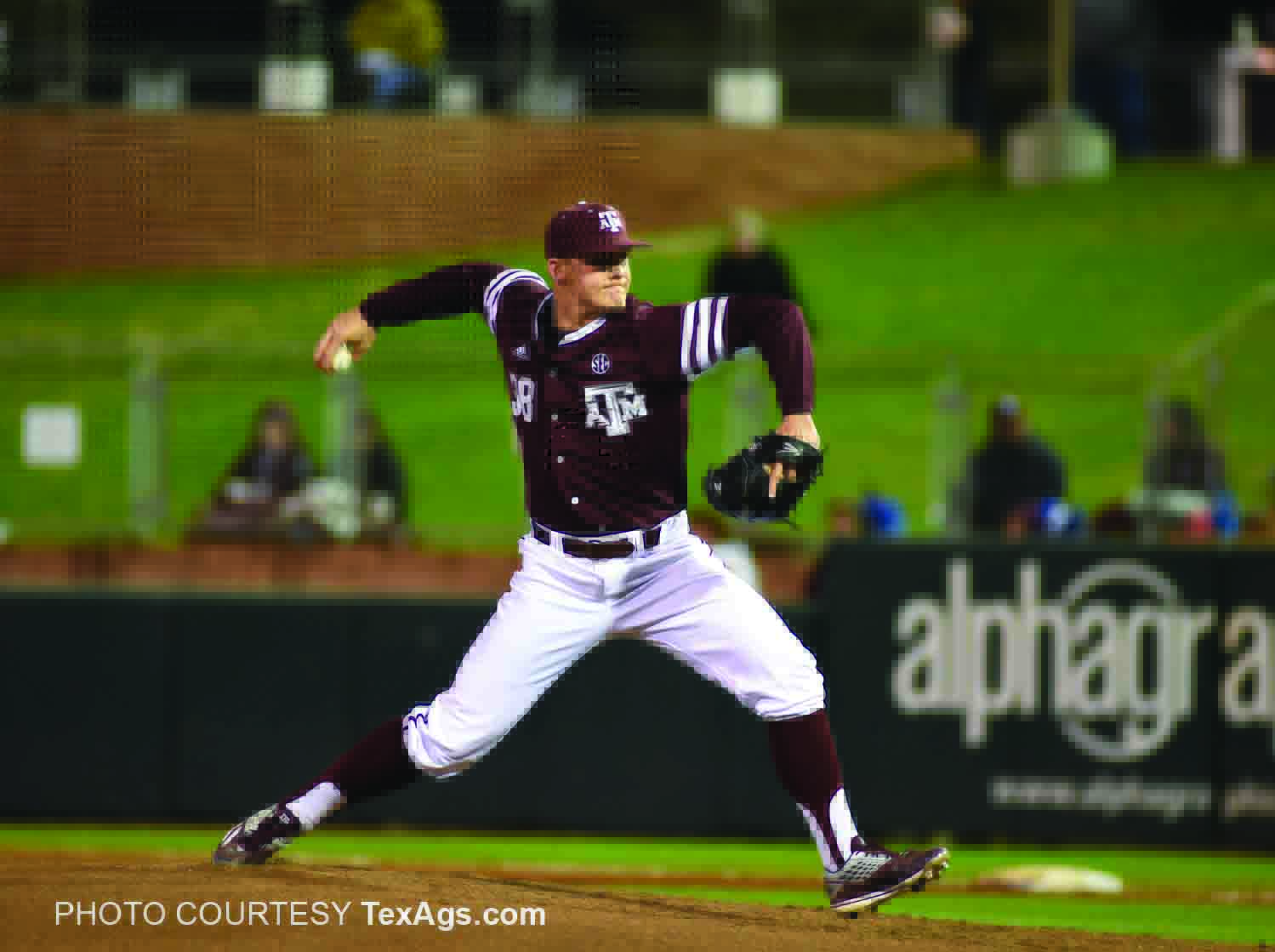 Most twenty-somethings starting out in their chosen profession face the pressure and stress of chasing success. Jace Vines, who has just begun a career in professional baseball, where pressure and stress are constants, has no worries. The Prosper High product has a powerful ally who is with him, has guided him and many ways has led him where he is today.

“God has given me the opportunities and the people in my life. He’s made me 6-foot-3 and 230 pounds; He’s given me my abilities,” Jace said. “I’ve not heard of anyone who pitched only 20 innings in high school get drafted. This is God’s journey. I work hard but God has a plan and why do I need to worry?

“Some days I wake up and can’t believe where I’m at right now.”

The last four years have been a series of happy happenstances. Playing for Rick Carpenter at Prosper, Jace was a good, but not great, player. The first break came when a pitcher was injured and couldn’t pitch in the playoffs. Jace took the mound and did well.

“Jason really encouraged him and thought he had potential as a pitcher,” said Jace’s father John. “And Jason’s cousin was an assistant coach at Weatherford Junior College who offered Jace a chance to get on the roster. I get goose bumps thinking about how this three-year journey has come together.”

There were no scholarship offers for Jace after high school, but the chance to be on the team at Weatherford allowed him to keep hope alive. He spent one year there without pitching but gained knowledge about pitching mechanics.

Then a phone call led him to Tyler Junior College. That’s where a major change happened, helping him develop as a pitcher.

A quick pitching tutorial: Pitchers who throw sidearm deliver pitches with their arms parallel to the ground. “Over the top” pitchers throw with the arms at close to a 90-degree angle. Pitchers who throw “three-quarters” are basically in between.

“The pitching coach at Tyler suggested I drop down to three-quarters and it’s my natural arm slot,” said Jace, who basically had two full seasons as a pitcher. “I picked up velocity and I had incredible movement on my fast ball. Before, I was fighting against my natural abilities.”

At Tyler, Jace won 10 games and lost once, being named a junior-college All-American. That led him to Texas A&M where last season he started 11 games and won six times.

“I didn’t have the season I wanted at A&M, I didn’t think I pitched all that well,” Jace said.

He was eligible for the Major-League draft in June, but Jace and his parents felt he might not be selected until perhaps the seventh round or later. Then came the phone call. The Kansas City Royals, then the defending World Series champions, selected Jace in the fourth round.

“I was completely shocked and it shows how much God has his hand in everything,” said Jace, who feels blessed to be drafted by an organization known for developing its pitchers.

“When we got that call we were laughing at the amazing thing God had just done,” said his father, who notes that his son has a self-driven work ethic along with a combination of being humble and hungry.

“As a mom, I don’t know how it all happened,” said his mother Jolyn, who laughingly says watching her son pitch is difficult because she feels he’s in a spotlight. “Jason (Jennings) had kept encouraging him and then Jace had the growth spurt … he was 6-foot when he graduated high school. I’ve always told Jace to take it as far as you can and have no regrets. Since he got drafted, he told me he feels God has him on this path and he’s going to follow it. That’s who Jace is.”

Another pitching tutorial: The wear and tear on a pitcher’s arm can lead to injuries that shorten and end careers. Jace’s pitching style, though, reduces the physical stress on his arm. With the three-quarters delivery, Jace throws a ball that has natural movement. He throws what is called a “heavy” ball. When hitters make contact, it feels like they’re hitting a metal ball.

Jace spent the rest of his summer playing for the Idaho Falls Chukars in the Pioneer Rookie League. He feels fortunate to have 17-year Major League veteran Jeff Suppan as his pitching coach. But his introduction to Pro Ball was rocky. He won a single game and lost six.

“I didn’t have the season I wanted but it helped me realize it’s going to be a lot of work to get to the big leagues,” Jace said. “It’s a game of failure; the more you fail, the more you learn.”

Still, the Royals and their scouts remain high on his potential. His next major step will be spring training where his performance over a few weeks will determine where and at what level he plays next summer.

“His agents are all very positive about Jace’s future and believe he can have a long Major League career,” John said. “It’s just crazy to think of how this all happened. It could end tomorrow and it would still be a great story.”