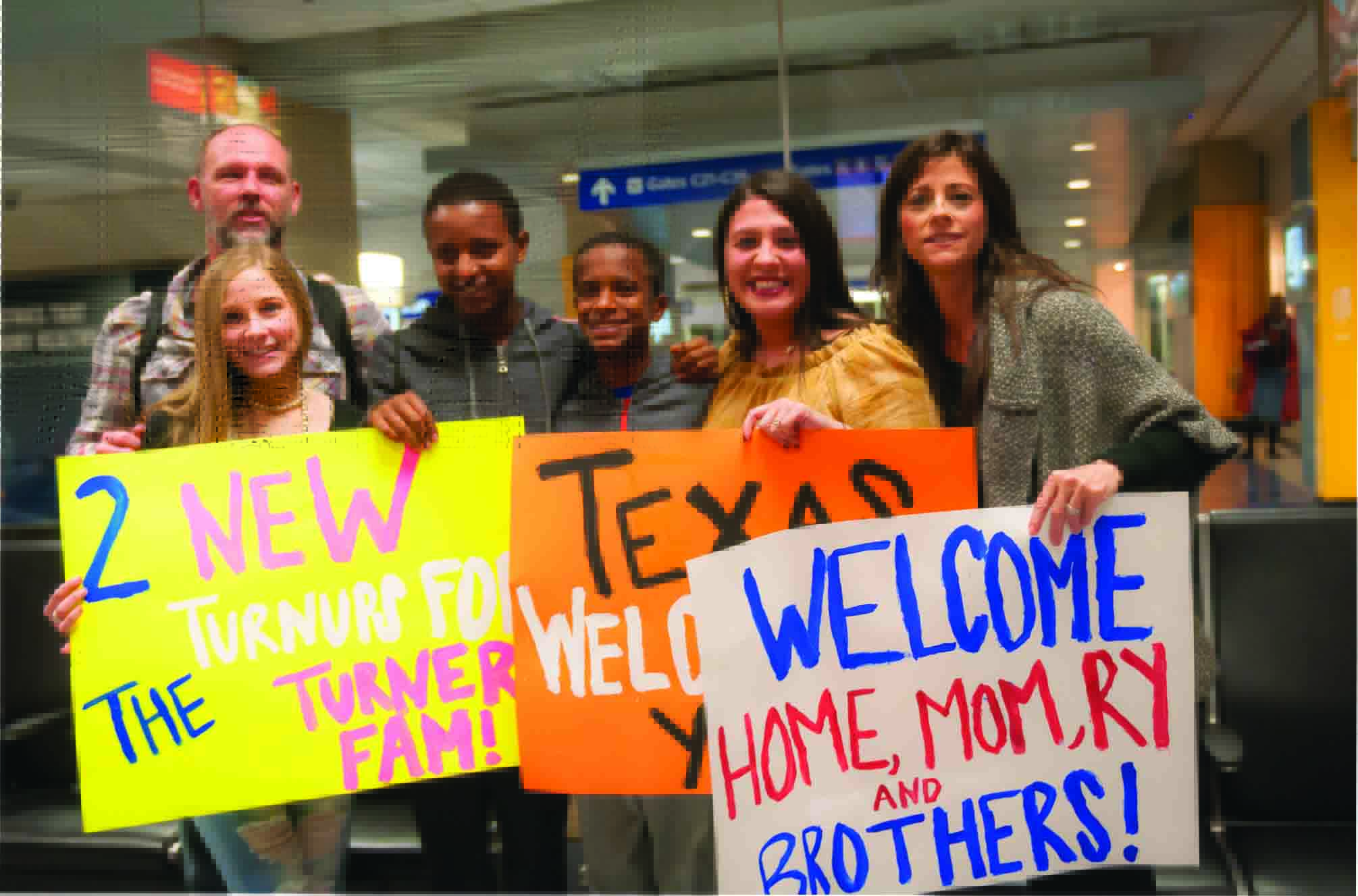 How long have you prayed for something you really want? A few days? A few months? What about three years? Might you have given up by then? Here is the story of one couple’s journey to adoption.

Ryan writes, “In the spring of 2012, my wife Annissa and I were discussing the potential of hosting some students from China through our church. I really felt the Lord leading me to do this, but Annissa was adamant she did not have the time to care for two more children; four was enough (she included me in that count). I understood, but the Lord continued to impress upon my heart to open our home. Annissa was terrified of the commitment, but finally agreed. Neither of us knew at the moment this was the first step of a long journey God was taking with us, and our lives and hearts were about to undergo a significant change; an unforeseen, and never desired, or sought after, upgrade.

“Fast forward one year to the spring of 2013: China Camp had been an amazing
experience, and we started attending a home group hosted by my in-laws. We were reading a wonderfully written book by Kyle Idleman entitled “Not a Fan.” One day, I was in our home reading the chapter on taking up your cross and dying to yourself daily when I came across a list of what that might look like in my life. As I sat upstairs next to our guest room with an empty bed, I read the second to last example: ‘Dying to yourself may mean walking by that empty room in your house and asking God if there is an orphan child in another country that should be sleeping in that bed.’ In an instant, the Holy Spirit completely changed my heart.

“Previously, I never thought twice about adopting a child. It wasn’t that I stood in opposition to adoption, but I always assumed a properly functioning body and systems equated to a biological child that resembled my wife and me. Adoption was never, and would not ever be, an option. That was before I sat upstairs in my house in a sweat, lump in my throat, unable to breathe, mouth wide open, and my heart beating so fast it made me nervous.

“I finished the chapter and later found myself explaining to Annissa what had happened. The first words out of her mouth were, ‘Oh my goodness! We’re going to adopt a child!’ Even after what I had experienced upstairs, my response was, ‘Wait a minute; let’s not get ahead of ourselves here!’ My wife’s next response both stunned me and watered the seed the Lord had just planted in my heart. She said, ‘No babe; you don’t understand. When we did China Camp last year, it completely broke my heart when those girls left us. I knew then I could love someone else’s child as my own, and I knew then we would adopt some day. I just didn’t tell you until now.’

“On November 27, 2013, the morning before Thanksgiving, Annissa handed me her phone to show me a Facebook post from a woman advocating for two brothers from an orphanage in Ethiopia. As I read the testimonies from families who met and spent time with these two young men, I quickly realized why she had given me her phone. Every description given of these two boys matched exactly what Annissa and I always thought our sons would be. My spirit was stirred up and I immediately spoke in my heart, ‘But Lord, they won’t resemble me’; but before I could even finish the thought, God spoke to my spirit and said, ‘If they love Me, they will resemble you.’ There was nothing else left to say.

Annissa and I contacted the appropriate folks and began pursuing our boys. More than a year later, home studies were complete, and we had immigration approval; however, the process seemed to get stuck at this point.”

The two boys were from the Tigray Region, which closed in early 2014. The adoption agency didn’t think it would be a concern because a verbal agreement was in place, but they were sadly mistaken. A standoff between the Federal and Regional Ministry of Women Children and Youth Affairs (MOWCYA) ensued.

Annissa explains, “MOWCYA has the final say on whether or not you get to leave the country with your child. Regional MOWYCA reviews, and it finally goes to court. But to get your court date, federal MOWYCA has to give you their much coveted signature. So according to our agency, there was a standoff between regional and federal MOWYCA about whether or not there was actually a verbal agreement, and if our kids could truly be grandfathered in.

”We tried everything. Our agency’s in-country worker would go back and forth from Addis to Tigray trying to get approval. We contacted our Senator, our Congressman, and people in Washington. The Ethiopian Judge, who supports adoption, gave MOWYCA three different deadlines and was going to issue us a court date anyway, but he never followed through. Nothing was working.
Ryan lost total hope. It was such a dark place in our life and our marriage. Had we heard the Lord correctly? Maybe we can’t hear him.”

The waiting and praying began. For one and a half years, Annissa “went to battle,” praying every morning from 4 to 6:30 a.m. She hoped for “baby blessings,” little signs from the Lord showing them not to give up.

But time takes a toll even on the faithful, and this is when Annissa turned to Romans 8:26, “In the same way, the Spirit helps us in our weakness. We do not know what we ought to pray for, but the Spirit himself intercedes for us through wordless groans.”

Exhausted, she prayed and visualized, putting it in God’s hands.

Annissa continues, “I put those boys in a basket and floated them down the river. Just like Moses. I said, ‘Lord, if we aren’t the parents you have for these boys, then send them where you want them, and I know it will be good because it’s your perfect will.’

“My husband was suffering from hopelessness of ever being called ‘Daddy’ and his faith was shattered. So truly more than anything I wanted those boys here so Ryan would believe again, and be the spiritual leader he once was.”

Brokenhearted, she found comfort in Psalms 34:18, “The Lord is close to the brokenhearted; he rescues those whose spirits are crushed,” and kept on praying.

Then one day, out of the blue Annissa received a Facebook Instant Message from an acquaintance in Washington D.C. saying Annissa needed to contact this certain person and that person would help her get her boys. Annissa was almost afraid to believe it. After researching and verifying this person could truly help, she approached Ryan, and together they decided to proceed.
Everything began to fall into place. The head of MOWYCA just happened to be in D.C. and had dinner with their new contact. Two weeks later, they had a court date of Dec. 20, 2016 and on Dec. 16, 2016 – a little more than three years after seeing those first testimonies about two brothers in November 2013, Annissa and Ryan started their journey to Ethiopia and their forever family.

A few weeks ago, Annissa’s office went on retreat, and there, a quote from Steve Jobs’ 2005 commencement speech to Stanford University spoke to her: “You can’t connect the dots looking forward you can only connect them looking backwards.” Usually one to look forward, Annissa took a moment to look back.

Annissa continues: “During the “Great Depression of 2016”, as Ella called it (Annissa’s daughter), I didn’t understand. I kept asking why: why are we waiting, why can’t we get the one signature we need, why can’t my husband find a job, why won’t You answer my prayer; just why all the time.”

“God turned me around for a look back and connected the dots. The answer to why: Because there was a nanny named Roma who was pouring into my boys, ridding them of all the rituals they were taught, all the backwards thinking of who Jesus was. She was showing them who Jesus truly is, taking them to church every Sunday, eventually leading them to the cross, both boys getting saved and baptized, letting the healing start to take place; and countless other providential graces.

“I still don’t understand why the things that have happened since we got the boys home have taken place; like why God gave Ryan a job in Pennsylvania for the first three months we were home so I had to do everything. Both Ella and I were left to figure everything out and navigate the cultural barrier alone, with no Dad. It was exhausting, and sometimes I just laid in bed and cried. And why did He take that job away so now Ryan is searching for work again, and I’m back working full time, which was not His plan for provision; was it? Why questions again!

“This is what I know: He does have a plan, and it’s a good one. It’s His plan! We will not lay down and believe the enemy’s lie that our Lord has abandoned us, because all I have to do is turn around and connect the God dots in my life. All of them!” The truth: He’s been there all along!